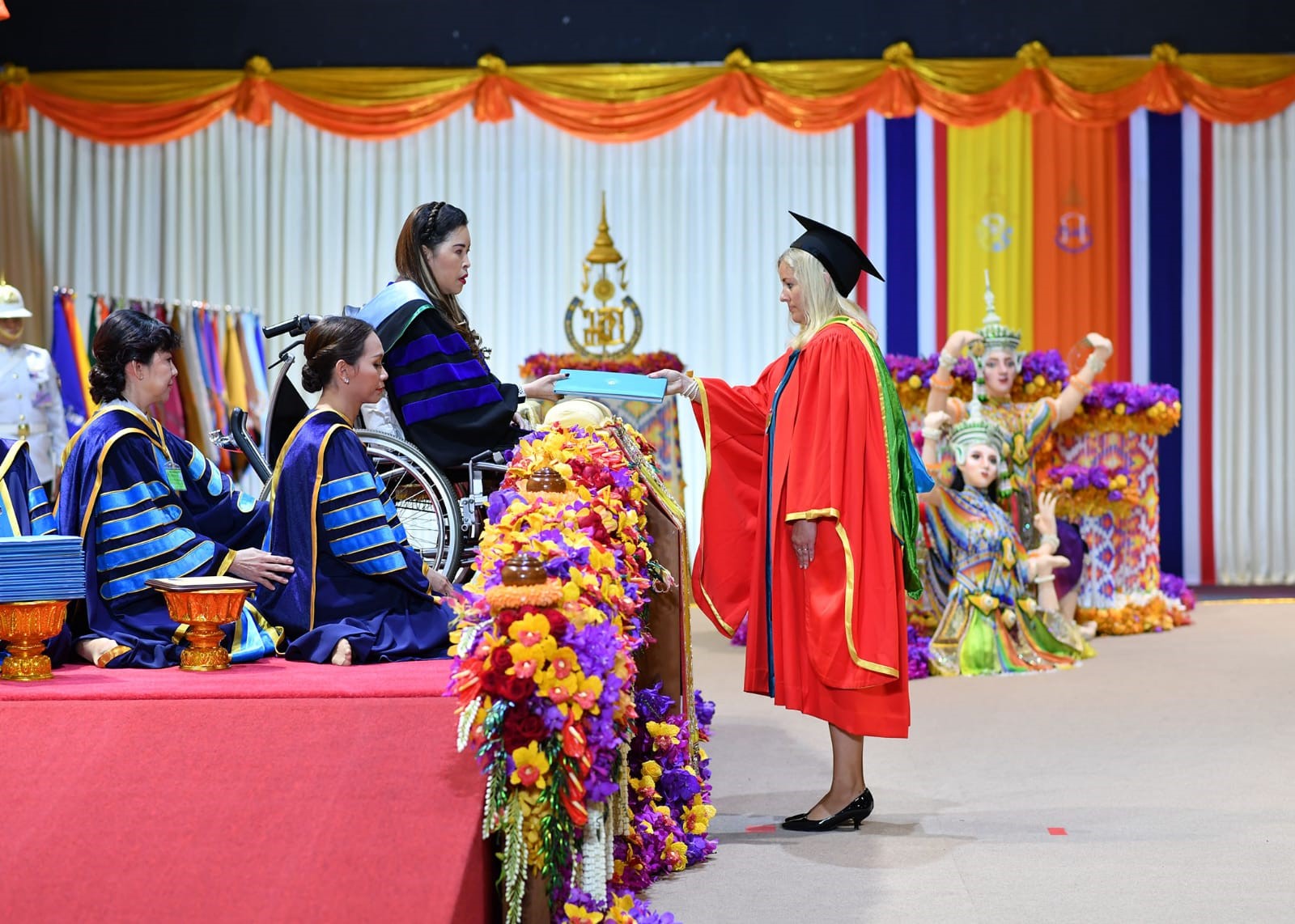 In recognition of her contribution and dedication to the advancements and improvements of higher education beyond the field of her expertise, and to honour her valuable outputs, the Council of the Prince of Songkla University in the Meeting 407, held on June 1, 2019, unanimously agreed to award an Honorary Doctorate Degree in Tropical Agricultural Resource Management to Dr. Petra Chaloupková. The awarding ceremony took place in the Convention Hall of the Prince of Songkla University in Hat Yai on September 8, 2019. Dr. Chaloupková was honoured to receive the degree from Her Royal Highness Princess Chulabhorn, who – being scientist herself – has founded a research institute and give lectures at Mahidol University in Bangkok. Due to the presence of a member of royal family at the ceremony, a spot from the handover was on Thai national TV in the prime time news.

Petra Chaloupková obtained her Master’s and Doctoral’s degree at the Institute of Tropics and Subtropics (former name of the Faculty of Tropical AgriSciences), the Czech University of Life Sciences Prague. Even before graduation, she started to actively involve the international cooperation and project development such as the development projects and after graduation, she started her professional career as an academic staff at the Faculty of Tropical AgriSciences. During the period between 2004 and 2010, she held simultaneously position of the Secretary General of the international organisation AGRINATURA that is the network of more than 30 European universities oriented to tropical agriculture and rural development. During the last 15 years, Dr. Chaloupková coordinated more than 10 development projects in Angola, Cambodia and Vietnam, which were targeted to support rural development, capacity building, training of local famers and/or enhancing the quality of higher education at the partners’ universities as well as students and staff training. Since 2007 Dr. Chaloupková has been holding the position of Vice-Dean for International Relations and during this period, she has coordinated more than 10 development projects and many projects from EU grants.

Since 2010 she has continuously collaborated with the Faculty of Natural Resources, Prince of Songkla University starting from the Erasmus Mundus project EURASIA 2 (aim: the promotion of the European system of higher education world-wide and to strengthen the existing network of co-operation between universities in Asia and Europe by expanding their experience in student and staff exchanges to the associate institutions), ASK Asia (Agriculture, Skills, Knowledge in Asia: Competences and employability of Erasmus Mundus Graduates in Agriculture on the Asian Professional Market), ALFABET (aim: to exchange capacities, students and staff, between Asian and European universities oriented to Life Sciences, Food, Agriculture, Biology, Environment and Technology to respond to the main international challenges addressed to the well-being of the next generations: agriculture, food safety and security, technologies in life sciences, balanced management of the natural resources, sustainable rural development, adaptation to climate change, with a special attention to the contexts of rapid economic growth) to the Erasmus + Capacity Building project SIMPLE - Support of International Platform Merging Labour and Education – all four coordinated by Dr. Chaloupková and to project PISAI (Participatory and Integrative Support for Agricultural Initiative), coordinated by Dr. Chutima Tantikitti, where Dr. Chaloupková plays an important role.

The genuine enthusiasm of Dr. Chaloupková in the field of international relations and capacity building in the broadest sense of the term naturally led to many successful stories, the honorary doctorate being one of them. Her achievements in the highly competitive environment bring a great inspiration how to effectively cooperate in the field of international relations. Petra Chaloupková is the only woman at the Czech University of Life Sciences Prague to receive the honorary doctorate.